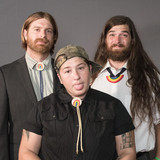 Playing taut, angular, but full-bodied punk rock, Thin Lips are a trio from Philadelphia, Pennsylvania led by guitarist and singer Chrissy Tashjian. Tashjian was previously a member of the well-regarded punk band Dangerous Ponies; that band broke up in mid-2013, but less than six months later, she had teamed up with fellow Dangerous Ponies alumnus Kyle Pulley, who moved from guitar to bass for the new project. With the addition of drummer Pat Brier, formerly of Tiger's Jaw, they began playing out as Thin Lips, and in November 2013, they released their first single, "Gemini Moon" b/w "Non-Monogamy Nightmares." In the summer of 2014, Pat Brier had left the group, and Chrissy's brother Michael Paul Tashjian, who had played with Dangerous Ponies and is also a member of the Weaks, became Thin Lips' new drummer. After plenty of live work, Thin Lips returned to the recording studio and released a four-song EP, Divorce Year, in May 2015. Shortly after the EP was released, Thin Lips expanded to a quartet with the addition of second guitarist Chris Diehm. After more touring and enthusiastic notices from the independent music press, Thin Lips began work on their first album, Riff Hard, which was slated for release by Lame-O Records in 2016. ~ Mark Deming, Rovi