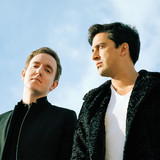 "Sounds like it's time to find a new dream." That was the reply from Queens of the Stone Age's road manager after RIBS drummer Chris Oquist explained that what was about to happen – opening for QOTSA – sat atop frontman Keith Freund's bucket list. Following a whirlwind 3-year period, including tour dates with The Joy Formidable, Swervedriver, and The Soft Moon, becoming Reddit's top r/music post of all time, and their song Queen of Hearts being featured in Brittany Murphy's final film (indie psych-thriller Something Wicked), the band decided not to ride the wave but instead move from Boston to Brooklyn and find a new sound. After half a decade of combining bedroom demos with proper recordings at the Chinatown studio of producer Ayad Al Adhamy (whom they met on tour with The Joy Formidable), RIBS are back with 1992, Too Long, and Hand–songs that explore obsession, self-delusion, and what happens when you never get closure.