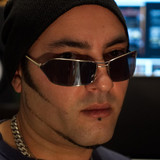 Martin Svinarov aka MDS was born in Sofia, Bulgaria. He grew up listening to The Beatles, Queen, Roxette, Jimmy Hendrix and metal bands like Metallica and Manowar. At the age of sixteen he started taking guitar lessons, after playing the piano for six years. At the age of seventeen he moved to Columbus, Ohio where he lived for a year. There he had enough time to start improving his technical abilities on the guitar, while graduating Bexley High school. At the age of eighteen MDS went back to Bulgaria where he got enrolled in the guitar department of New Bulgarian University. After graduating with honor, he fulfilled one of his dreams – to learn from the best in show business. MDS won scholarship and went to Los Angeles where he attended LA Music Academy. There he had the unique chance to study with Frank Gambale, Brad Rabuchin, Steve Fister, Philip Bynoe and many other great musicians. MDS is influenced by musicians like Steve Vai, Joe Satriani, Greg Howe, Frank Gambale, John Petrucci and Dream Theater, Gary Moore, Steve Morse and many others. When he is not playing the guitar, MDS likes to work out, enjoy the calmness and the beauty of the mountains, fishing and various kinds of car sports. Official web site - www.mdsproject.net