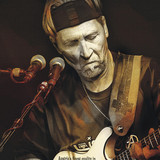 Leo Kysèla - master of unusual interpretations. Together with his equally talented musicians, Leo shapes worldwide hit songs into miniature works of art, guaranteed to raise goose bumps. Alongside classics from his own pen, Leo Kysèla cloaks ballads known all over the world in an entirely new sound. These muted tones, presented with masterly acoustic accompaniment and a voice whose intensity and expression may well be unique in the German-speaking countries, will soothe and massage ears and soul alike. Leo Kysèla has issued thirteen albums to date on cd, one video, one cd-rom, two dvds and has played over 3000 live gigs. "The most exciting aspect of Leo Kysèla's music is undoubtedly his voice. As a matter of fact, I can think of only very few vocalists that use the same level of intensity, expression and dynamics as he does" A - Manfred Ergott (ConcertoWorldmusic)