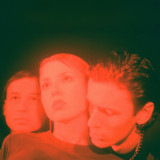 The Goon Sax are James Harrison, Louis Forster and Riley Jones from Brisbane, Australia. They release third album Mirror II in July 2021. Mirror lI is a new beginning: a multi-dimensional eclectic journey of musical craftsmanship that moves from disco to folk to no wave skronk with staggering cohesion. The first-person narratives of their school days have graduated into an immersive and fluid world, one where “the narrator changes, the view-point isn’t definitive”. Songs have been made expansive, more universal, more weird.