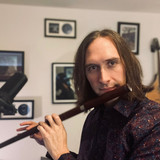 Since 2006, Derek Smootz has released four original albums and a number of singles as Longing for Orpheus.

With a stylistic range including Chillout, New Age, and Dreampop, his music has been featured on podcasts such as JourneyScapes and Ultima Thule (the world's longest-running Ambient music show). Derek is a classically trained pianist and vocalist who's performed in numerous operattas and musical productions, mostly notably with Gilbert and Sullivan Austin (Strephon in 2009's Iolanthe, Florian in 2013's Princess Ida, and Giuseppe Palmieri in 2016's The Gondoliers).