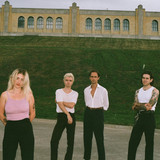 FRIGS is a Toronto-based band that pairs the raw, emotional grunge of PJ Harvey with the immersive, psychedelic post-punk of early Sonic Youth. With each member bringing a unique set of influences, FRIGS creates a sound that is hard to pin down and an impression that’s unshakable. Led by the force of Bria’s vocals, the band has earned a reputation for putting on an hypnotic and visceral live performance. Embracing the mercurial and experimental, their shows are built upon instinct; a vocal growl can unexpectedly give way to a hushed whisper; languid drones boil over into guttural and searing tones. Maintaining the communal, do-it-yourself spirit of their forebears, the band bought recording equipment and turned their Toronto apartment into a studio where they wrote, engineered, and mixed their 2016 Slush EP, and half of their debut full-length. In 2018, that debut, Basic Behaviour was released to a flurry of positive feedback including a Long List Nomination from the Polaris Music Prize, and from the likes of Pitchfork saying it has “depth, texture, and just the right amount of rage.” AV Club commented “FRIGS have a rare, impulsive energy that pushes every one of Basic Behaviour’s songs to unexpected places,” and FRIGS were hailed as having “an intensity that’s hard to shake,” by the The New York Times.