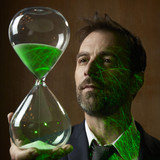 One of the rare eccentric, eclectic recordings artists who managed to court major acclaim, both critical and popular, Kevin Johansen and his band, the Nada, charmed audiences throughout Latin America, in Argentina especially, and racked up three Grammy nominations for only their second album, Sur o No Sur. A multicultural artist to say the least, Johansen was born in Alaska of all places but grew up in Argentina, the son of an Argentine mother and an American father. He moved to New York City in 1990 and lived there for nearly a decade. While in the Big Apple, he played at CBGB's on a regular basis and also played at the Knitting Factory and the Mercury Lounge, getting lots of performance experience in the process and forming the Nada. Just before he returned to Argentina in 2000, settling in Buenos Aires, he recorded his debut album, The Nada. Released in Argentina by Los Años Luz and in Spain by K Industrias, the album explored all kinds of hybrid styles and, like his subsequent albums, was a bilingual affair. As such, it won over critics pretty easily, as those folks tend to really go for that sort of creative, multicultural, and highly literate music opposed to the abundance of commercial product they have to deal with day in and day out. The album was a little slower to win over mass audiences, however. That would come with Johansen's next album, Sur o No Sur, released in 2003 by Los Años Luz in Argentina and by Sony Discos in the remainder of Latin America. This album was a significant step forward, once again eclectic but this time even more so, comprising a whopping 20 tracks, all of them distinctly unique (for instance, the back cover includes brief descriptions by Johansen of what style each song is -- for example, "Popklore" is one, "Barry White Meets Nirvana" is another). Once again, critics loved it (it garnered three Latin Grammy nominations, including Album of the Year and Song of the Year), but this time audiences were much more receptive, with Johansen + the Nada performing for huge audiences throughout Latin America and Spain and touring throughout the English-speaking world, too. Following this whirlwind of success, he finally settled down to record his third album, City Zen, which was a more understated affair yet still lined up critical acclaim right off the bat. ~ Jason Birchmeier, Rovi