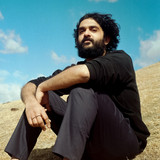 Singer/songwriter/producer Sid Sriram represents a collision point of radically different worlds; a true hybridist. Sriram was born in Chennai, India. His family moved to the San Francisco/Bay Area suburbs when he was one. This duality of cultural roots was integral in forming Sriram’s personal and artistic identity. He graduated from Berklee College of Music with a degree in Music Production and Engineering; here is where he started exploring and building his own sound. Sid Sriram's music creates a bold cross section where Pop/Soul, his Indian Classical roots and alternative/ambient music clash vibrantly. ​ ​