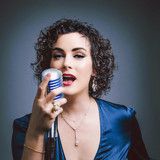 NYC Vocalist and musician Lizzie Thomas has made a name for herself as a swinging, sultry vocalist with a beautiful stage presence. She captivates her audience with the rare ability to sing with absolute precision on lightning speed tempos, with melodic freedom and control. Her phrasing is effortless and naturally swings. * She has won high praise performing and/or recording with many, including Russell Malone, Jay Leonhart, Xavier Davis, Alvester Garnett, Michael Kanan, Ron Affif, Frank Lacy, Antoine Drye, Pasquale Grasso, and John Colianni. * “I can call a tune, for the rest of my life and I will never sing it the same way. That’s freedom, that’s provocative - That’s jazz." * Ms Thomas started studying classical piano at the age of 8, clarinet at 10, and at age 12 her voice was discovered. She was graduated with a Vocal Performance BA degree from Belmont University, in Nashville TN, where she studied with Sandra Dudley. She also holds a Music Education Degree and certification in early childhood music. Thomas moved to New York, the jazz capital of the world to work with the best musicians and has recorded three albums to date and released each independently. More Than You Know (2010), Easy To Love (2013), and her timeless holiday offering Santa Baby. Her latest album New Sounds From the Jazz Age is being released in January of 2020.