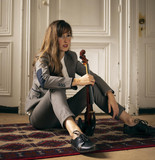 Myrthe ‘Mimi’ van de Weetering (The Netherlands) started playing violin at the age of five. The first couple of years she refused to read sheet music and insisted on writing her own music. She also didn't feel like committing to her own instrument exclusively which is why she was often found playing her mother’s piano or her sister’s cello instead, preferably butt naked. After finishing a bachelor's degree in Music Production and a Masters in Composition nothing really changed. She still composes her own music and plays it by heart, and still switches between playing violin, singing and some bass playing. The only difference is that what once was considered as rebelliousness and labeled undesirable is now - quite to the contrary - admired by some as autonomous creativity and artistry. And of course, she replaced her birthday suit with something more widely accepted. Reluctantly.   She arranged, played&recorded the strings for Shahmen – BAD DREAM CATCHER, played the strings on Planet of The Gods by Killah Priest (Wu-Tang aff.) and released Snooze together with RINZ. and Inf. In the Netherlands she was a member of the act Akwasi, that won Gold for their single Dorst, Kovacs that won Gold for their album Shades of Black and she wrote the string arrangements and currently heads the string quartet of Duncan Laurence, the winner of the Eurovision Song Festival 2019. In 2020 she has been asked to write the string arrangements for the Metropole Orchestra for a movie (TBA).