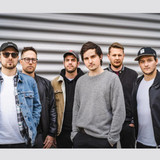 Cemetery Drive is a rock band hailing from the very north of Italy. Inking a deal with established LA based label “We Are Triumphant” and releasing their label-debut “Mixed Feelings” in 2017 the band has gained many new listeners and some of the most passionate fans. Cemetery Drive manages to capture a wide range of emotions in their music that reaches from new-wave pop-punk to early 2000s emo. Their sophomore EP “Searchlight” was released in July 2019 and is promising a further step up in the band’s career. Cemetery Drive currently consists of Simon Feichter, Philipp Raich, Thiago Accarrino, Patrick Guerra, Roman Giovanelli and Dominik Mayr.