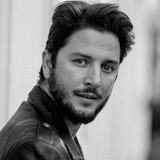 Manuel Carrasco Galloso was born in Isla Cristina (Huelva), the 15th January in 1981. In love with his homeland, he spends his childhood and early years there. Since he was very Little, his great passion was the music. His father gave him as a present his first guitar at the age of 11. With it, he starts to créate his firsts pieces, letting his creativity loose with the carnival songs.   Manuel is without a doubt, a composer of tales, an artist capable to turn his words into verses and to transform emotions into melodies. The root of his origin is visible all along his whole career, as well as the depth of his feelings, that he reflects in every song.   At the same time, it is in his live perfomance where he finds his natural environment, as it is reflected in the two last tours, each one captured in a DVD. ‘’Una Noche Olímpica’’, at the Seville’s Cartuja Stadium, where he gathered more than 45.000 people with the ‘’Bailar el viento’’ tour. (Tickets and earnings record in 2015), and ‘’Live from the Metropolitan stadium’’ (55.000 spectators) in Madrid, from his last tour, ‘’La Cruz del Mapa’’ where he once again defeats all odds, selling more than 350.000 tickets in 34 shows. The most successful tour in Spain.   Regarding his discography in recent years, ‘’Bailar el viento’’ and ‘’La Cruz del Mapa’’, not only have they been platinum albums, but also remain on the best selling charts for more than 70 weeks and number one for consecutive weeks.