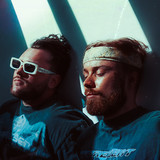 Norwegian artist-duo Mentum expresses themselves through a synthesis of hip-hop-infused contemporary R&B and soulful Pop. Tim and Finn were born in Oslo, Norway with similar cultural backgrounds, though their musical influences sat on separate edges of the musical spectrum. Through early influences such as Blues, Classic Rock and Pop - to House, Disco, and Electronica, together they embody a rare diversity of musical impulses. Mentum released their first Pop/R&B-inspired EP called 'Bella' in September 2020, and in June 2021, Mentum dropped a remake with Mike Perry of The Kelly Family 's legendary song Fell In Love With An Alien. Tim and Finn first met in 2014, and ever since then they’ve been experimenting with different sounds and musical paths, which has now shaped into the artist-duo we know as Mentum.