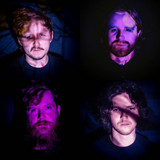 From the howling wastes of the high desert comes Mortigi Tempo - the kind of sensual sonic hallucination you can really shake it to. Hailing from Salt Lake City, this neo-psychedelic trio features guitars that crunch and vocals that bite from Christopher Fallo; the thick, slithering basslines of Marc Leach; and Eric Watson's hammering drum work, as steady and heavy as a brick wall

Founded in 2012 by Fallo and Leach, the group's sound was shaped not only by the Lynchian exploits of their mountain home, but also the paradigms of glam rock, Brit rock, and desert rock. Mortigi Tempo quickly grew a sizeable, devoted fanbase, self-released a full-length and two EPs and went on to score high profile gigs with