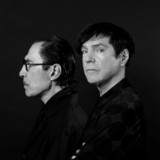 Internationally acclaimed recording artists Sparks, brothers Ron and Russell Mael, have released 23 creatively bold albums since their debut in 1972. Moving to London from their native Los Angeles in 1974, Sparks released their 3rd album, the influential Kimono My House, which quickly became a worldwide phenomenon, setting the tone for the band’s creative output to follow. Since that time, Sparks have created a unique musical legacy both on record and in live performances. In 2008 they performed all 21 of their albums (to date) in their entirety in 21 nights.Their highly visual stage presentations have been viewed throughout the world, including stops in Japan’s Fuji Rock Festival. London’s Royal Festival Hall and the 2011 LA Film Festival. Sparks have been cited as a major influences on musicians as varied as Morrissey, Bjork, The Ramones, Faith No More, Sonic Youth, and Nirvana. ‘Hippopotamus’, their 23rd album, received unanimous acclaim on its release in

2017, subsequently appearing in many ‘Album Of The Year’ lists. The accompanying world tour saw Sparks and their band play a set that was euphoric, vital, brilliant and uncompromisingly typical of a band that refuses to rest on their laurels. Their 24th studio album - A Steady Drip, Drip, Drip - is released digitally in May and physically in July 2020. Two films are due for release - Annette (written by Sparks & directed by Leos Carax) & an as-yet-untitled documentary film about Sparks (directed by Edgar Wright)