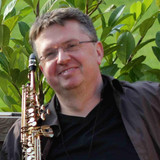 For Niels, it’s all about musicality and integrity. Whether he’s playing Bach on baritone, JacobTV on alto, Baldwine on soprano or original pieces written for him on his beloved tenor saxophone, it’s all about bringing the music to life. Niels Bijl is an exceptionally versatile saxophonist. His major projects include CDs with repertoire for tenor saxophone, the Aurelia Saxophone Quartet, The Four Baritones and his collaboration with Ronald Moelker and many other varied musicians from accordion to harp to string quartet. Highlights of his career are his Solo tenor saxophone tour Australia-New Zealand 2010. He has played on tour with Valeri Gergiev's World Orchestra for Peace. The theatre production Ik ben niet bang with René Groothof received the prestigious Silver Krekel Prize in 2012. In 2014 he shared the stage with esteemed colleague and friend Branford Marsalis, in Paradiso Amsterdam and in Niels' hometown Enschede. As part of his integrity he gives back to young musicians. He has given numerous masterclasses almost everywhere in Europe as well as Japan, New Zealand, Australia, Brazil, Canada and America.