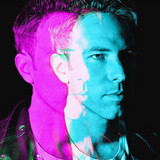 Fantazmz is the moniker of David Gagne, a Maine-born New Yorker. David began a carrier in music fronting Portland reggae band, EastWave Radio, releasing the EP Soulful Noise and touring Canada, opening for and backing Jamaican Dancehall artist, Jah Cutta. The tour was cut short when their van slipped off an icy roadway. David was badly injured and was hospitalized for two weeks before returning to Maine to heal. Moving with his family to southern California in 2014, he immersed himself in the scene and linked up with Brian Stanley of LA-based bands, The Years. Brian's ear and direction have been of great importance to David as he's developed and assembled the Fantazmz sound. Since moving to NYC in ‘16, David has performed everywhere, from subway platforms to well-known clubs and music venues. He's steadily been outfitting a home recording studio and working as a producer for up-and-coming artists in the city. Fantazmz began releasing material in the spring of 2019 borrowing mainly from the synth driven styles of the 80's. The first single, "The Mall"

a song about the love one garment shop mannequin has for anther, has been well received in the synth pop community. Fantazmz' 4th single "Number 85" tells the tale of a space chimp in the early days of the NASA space program and is scheduled for release July 20 2020.