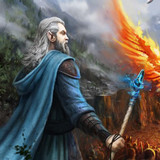 Gaia Epicus is a melodic metal band from Norway that has existed since 1992, but the band has changed its name and music style several times. The band started as a Punk Rock band under the name of Raw Meat in 1992. A year later from 1993 to 1998, the band was known as Execution and played Thrash Metal. From 1998 to 1999, the band was known as Millenium and played Melodic Metal. Then they changed their name to Theater of Pain from 1999 to 2000. In 2000, they continued to play melodic metal, called Eternal Flame. So finally in 2001 they changed their name to Gaia Epicus and began playing Melodic Power Metal. The band released its first album in 2003 and has since released several albums after this.