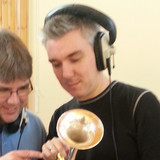 Anthony Thompson is one of the busiest trumpeters in the North of England! His studio album The Anthony Thompson Collection, live album An Intimate Evening With the Bish/Thompson Duo (Recorded Live at Castleford Salvation Army) and the Loose Ends EP are available here on Spotify. As a freelance musician, he has performed (often as principal trumpet) with most of our major orchestras, such as the Hallé, RLPO, CBSO and Royal Northern Sinfonia. In April 2008 Anthony was appointed principal trumpet of Sinfonia ViVA and since Christmas Day 2002 he has been principal trumpet and soloist with the New English Orchestra. As a session musician, Anthony has played on recordings with artists as diverse as Norman Wisdom, Barbara Windsor, Claire Sweeney, Shirley Bassey, Native And The Name, Delirious? and Gorillaz amongst many others. Highlights of live performance include playing with Steve Winwood, duetting with Sting and performing for Pope Benedict XVI! Why not visit www.anthonythompsontrumpet.com or follow @AntTrumpet on twitter?