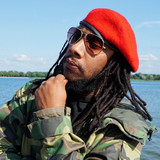 Born in Khartoum, Sudan in 1989, singer Mo Ali got captivated by a picture of Bob Marley in his uncle’s bedroom when he was 10 years old. He started listening to cd’s of Bob Marley and watched videos of his live performances. He mimicked his movements and sang along to the lyrics – He kept developing his musical talents and taught himself how to play guitar, followed by drums, keyboard, and bass.

Making him not only a great singer, but a very versatile artist in genres like reggae, ragga, ska, rock steady, hip hop, and rap. Mo started his professional music career in 2010 when he formed his own band called “Sudan Roots”. Three years later he segregated from the band and later formed a new band which he called “Mohamed Ali and the Nile Riddim”. In 2015, Mo Ali got invited as a guest artist by the Dutch Bob Marley tribute band named “Rootsriders”. Two years later he became the lead singer of the band and has since been touring through the Netherlands, France, Belgium, and Germany. When Mo is not on tour with the Rootsriders, he is producing his own songs and making shows in Africa and the Middle-East. His first EP Album "Alhamdo lilah" will be out August 30 2020