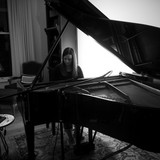 Tracey first began writing and recording music while living in the UK in 2010. After moving back to Australia in 2011, she released several albums including Defining Moments in 2012, followed up by Third Place in 2013. Her music gained considerable momentum on Spotify streaming playlists with the successful release of Nightsky in 2015 and Secret Garden in January 2017.   Tracey’s unique sound borders on the classical-crossover genre, where post-rock anthems collide with contemplative piano melodies. Quiet moments of ambient sounds gently build with driving rhythms and orchestral soundscapes, taking listeners on an emotive and hopeful journey.   Over the last eight years Tracey’s writing style has evolved, stretching her beyond the limitations of digital music production. In 2016, she began searching for an acoustic grand piano — “...to bring my music to life in a more genuine way”. After two years of searching she found a pre-loved Steinway grand piano and immediately connected with its character and warm tone.   Her latest album Oceans was launched on 26th April 2019 and is the first in a series of releases to feature acoustic piano.