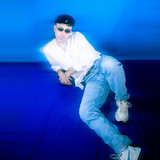 This restless and talented artist from Barcelona is considered one of the leading exponents of the electronic and alternative Spanish scene in the last decade. Two studio albums and multiple national and international shows have placed El Último Vecino in a privileged position in the independent national music scene. Strongly influenced, as usual, by 80s synth music, his work, a particular electro-pop style, is a symbiosis between contemporary and vintage music.