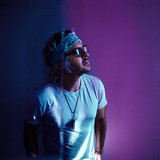 FRND is the pseudonym of a musician and producer, Andrew Goldstein (blackbear, Lauv, Oliver Tree), based in Los Angeles. His music features breathy vocals, soothing melodies, and layers of gentle electronic beats. FRND signed to boutique record label Crooked Paintings in 2016. That same year, he released his debut single, "Friend," which received coverage from Impose magazine and other online outlets. In 2017 FRND released his debut EP, "In Your Dreams",

followed by a feature on blackbear's hit, "anxiety (with FRND)" which he produced and cowrote. In 2018 FRND dropped the "Before U I Didn't Exist" EP and has continued to collaborate with a number of Top 40 artists and songwriters. Following his third EP “Adventures of the FRNDship: Issue One”, FRND kicked off 2020 with his newest single “Champion”, a collaboration with YouTube tastemaker Koala Kontrol to help raise money for Koalas in Australia. Collectively, FRND has amassed over 200 million streams on Spotify alone.