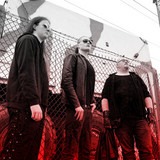 Tankard Haus is an experimental futurepop band formed in the United Kingdom by Thomas Yorkshire, Andrew 'Aro' Owen and Nathan Price. The group was originally founded 2013 and saw their first full album "Stalkers" release in 2020. The sound composed by Tankard Haus has been referred to as aggressive futurepop and a unique vocal style, bringing an eclectic blend of industrial elements and synthpop sounds to the table. The first release by Tankard Haus is the Stalkers EP featuring 4 tracks and 4 remixes, including the title track "Stalkers" and the first official single "When I Fall". Stalkers EP was originally released in March 2018 as a free download and available to stream on all popular streaming services. Shortly thereafter, Tankard Haus released the single "The World Belongs To Us", which is a cover of Informatik's track of the same name from their Re:Vision album. The cover performed by Tankard Haus was released in May 2018 for free download and streaming. May 2020 Saw the release of the first full length album by Tankard Haus under the name "Stalkers 2020". The album is a collection celebrating all the finished tracks that the trio have completed up to that point in time, containing remastered versions of all of the tracks from their debut EP, a new single "This Too Shall Pass" and many other additions that were previously unreleased. While Tankard Haus remains on an indefinite hiatus, two members have formed a new aggrotech group called 'XENOBEAT'.