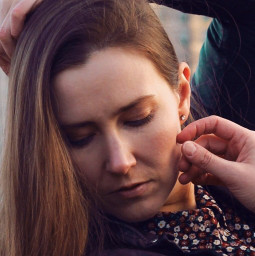 Siru is a Helsinki-based singer and songwriter who makes organic Scandinavian pop. Siru’s music is characterized by emotional and powerful songs, unpolished sound and authenticity. For her, it is important that her music evokes strong feelings in the listener. Music always comes first for Siru when writing boundary-breaking songs that combine organic and electronic instruments. The themes of her songs stem from past life experiences and topics that touch the artist personally. Siru started seeing colors and found new meaning in her life when her first child, a son, was born in July 2020. When not changing diapers, Siru also studies songwriting in Helsinki Pop & Jazz Conservatory. Siru is the winner of The Voice of Finland in 2014. Her album Solmut, released after the win, gave her career a solid foundation. After the Finnish-language album, Siru gave herself the freedom to create music regardless of boundaries and language, and eventually changed from Finnish to English. In addition to conquering the domestic market, the artist also aims for international markets, especially the Nordic countries, Germany and Britain.