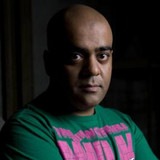 ‘infected’ by the house music virus in the early nineties. Like every other hard working dj back in the day, he spent a couple of years spinning anywhere and everywhere. During the next couple of years he kept gigging all over the place. It looked as if he could be at multiple locations at the same time as his name could be found on almost every bill of every major club and/or party in existence. In Holland and Europe! His productions grew stronger with every new release and when in 2003 his track “Peak Compression” was picked up by Pete Tong in the BBC Radio 1 show, it seemed nothing could stand in the way of this talented dj/producer. Rishi Bass was one of the originators of the populair genre " Latin House"