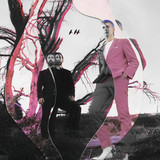 Twenty years ago The Juliana Theory declared emotion dead. Of course the title of their landmark album was mostly tongue-in-cheek.

Passion, empathy, and defiant vulnerability spilled from every note of 2000’s Emotion Is Dead, assuring that emotion was indeed very much alive. Today, 15 years since they last released new music the band can now say the same. Enter “Can’t Go Home” -- a luminous, synth-laced, bittersweet fight song boldly announcing The Juliana Theory’s return via the punk standby Equal Vision Records. “Can’t Go Home” and its sweepingly cinematic video are both a vast departure from where the band left off and a love letter to its creative core. Brimming with newfound purpose, the Juliana Theory is primed to impart this spirit to the future.