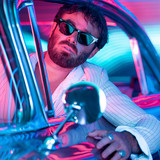 Like a 60s soul standard, ‘Rose Pink Cadillac’ strikes the balance between specificity and universality perfectly — it is the classy champagne-soaked red carpet and heart that beats underneath this new era of Dope Lemon. An inevitable wedding song staple, it’s addictively bright-eyed. The song’s video, featuring the winged Cadillac of the song’s title, as well as a troupe of dancers, embodies the song’s louche, glamorous mood. Dope Lemon aka Angus Stone has amassed over 400 million streams from his two widely acclaimed albums, Smooth Big Cat (2019) which came in at #2 on the ARIA Album charts, and Honey Bones (2016), as well as the Hounds Tooth EP. The release of Honey Bones was an instant-classic and saw Dope Lemon become not just a melting curio of artistic experimentation, but a fully-fledged cultural phenomenon. Dope Lemon's new album 'Rose Pink Cadillac' will be released on 12 November 2021.