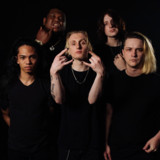 Love clings to you forever whether you’re in it or out of it. Like an apparition you can’t shake, it never leaves. The music of Love Ghost haunts in a similar fashion. The Los Angeles quintet—Finnegan Bell [lead vocals, guitar], Ryan Stevens [bass, backing vocals], Daniel Alcala [guitar, engineer, backing vocals], Samson Young [drums, backing vocals], and Cory Batchler [keys, backing vocals]—crawl into a space between ethereal grunge and lo-fi bedroom hip-hop punctuated by emotional delivery and airy hooks. Long after the heyday of Alternative Nation, Finnegan stumbled upon his parents’ copy of Nevermind and fell under the spell of grunge. At 13-years-old, he grabbed an acoustic guitar and played in coffee houses and backyards around L.A. Inspired by The Smashing Pumpkins, Alice in Chains, Juice WRLD, Lil Peep, he quietly cultivated a sound akin to “Nirvana putting beats over their songs with a trap machine.” With the lineup in place, they hit their stride in 2019 and attracted praise from LA Weekly, Elicit Magazine, Buzz Bands LA, Alternative Addiction, and Huffington Post. Building an international fan base, they even toured Ireland, Japan, and Ecuador. Teaming up with producer Danny Saber [Marilyn Manson, Madonna, Alice Cooper], Love Ghost got to work on releasing singles on a monthly basis. Generating millions of streams and views to date, the group conjure a style equally informed by Seattle tradition and Souncloud-era fearlessness with more music on the horizon.