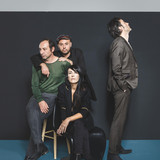 One of the most personal and influential groups of the Latin American scene in recent years. With their fourth record Diamantes the group from Pamplona established a style for the history books of Ibero-American pop rock: dark and full of tension, a sophisticated and different finish, an irresistible vocal duality, and hits. Toro was an alternative success in many Spanish speaking countries, and the band achieved no less than 5 awards in Independent Music: Best Spanish Group, Best Song, Rock Album, Musical Production, and Best Live Act. They also received the IMAS Award in Mexico for Best Spanish Artist. Diamantes was the Album of the year for the magazine Mondosonoro and was present in the majority of media lists in Spain as well as Mexico. In April 2014 they published Ballenas Muertas En San Sebastian, a highly anticipated return that fails to appease the desire of the group to follow some hackneyed roads. Get him catch the sound of a direct already raw, tense and powerful. It is a risky album with sounds and dark and cryptic lyrics. The decline in his hands becomes a frenzy, and his lives performance are the best example.