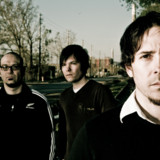 Featuring All the Brightness

Toronto power trio comprised of frontman Nick Mazzei, bassist Kevin Bailey and drummer Pete Maniatis. Growing up in the big city and coming from three culturally distinct backgrounds, they found a way to intertwine their diverse musical influences, inspired by the one thing they love the most... kick ass rock! Great successes followed their powerful debut album "Lost in the Soul Deposit" and the seasoned follow-up "Destiny Weeps". The band took first prize in the USA songwriting competition in 2006 for alternative rock, had their video added to rotation on MUCH MUSIC'S MUCH LOUD in the fall of 2007, and enjoyed song placements in TV shows ("Friday Night Lights", "Shark"), movies ("The Roommate"), and video games ("Vin Diesel's Wheelman"). They were also sought out to co-produce and perform the opening theme song for the reality based TV show "Crash Addicts" on the Outdoor Life Network. In 2019, after a decade spent raising families, they returned with the EP, "A Minor Sacrifice". Inspired by their changing lives, these five introspective songs present a more mature sound, reflecting a love of their music and their families.