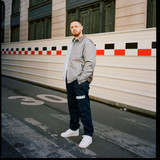 Paris-based producer and member of Point Point, Aazar, has been immensely busy in the studio working on an abundance of exciting new music this year. Having produced official remixes for the likes of David Guetta (Flames) and Martin Solveig (MyLove) as well as powerful collaborations with Cesqueaux, Yellow Claw & Moksi (Shanghai Nights Album), Aazar is generating an undeniable buzz around him and his music. His more recent collaboration with The Chainsmokers on ground breaking track ‘Siren’ has been streaming non-stop worldwide. Aazar’s tracksaregathering support from a wide range of top tier DJson a global-scale, making him increasingly recognisable on the dance floors amongst his fast growing fanbase. Consistently appearing on the most renowned playlists across Spotify and Apple Music, Aazar’s faultless capability of connecting with his audience internationally is undeniable. The ability to create tracks adapted for varying situations makes Aazar a unique entity, from ‘Booty Time’, the instant club hit, to the phenomenal ‘Da Vinci’, a true festival anthem produced by DJ Snake under his Premiere Classe Record Label. Aazar’s live career is also on the rise, continuously touring around the world and playing for new audiences in Europe, Asia,USA as well as celebrated festivals such as Tomorrowland, Encore Beach Las Vegas, Mysteryland, the momentum is clear in Aazar conquering these territories.