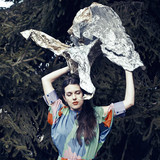 Swiss Singer and songwriter Pamela Méndez values independence. She taught herself to play the guitar, and also to produce music and to cut videos. Therefore, publishing her music on her own is self-evident. End of February 2019 her second album "Time" co-produced by David Odlum ( Tinariwen, Gemma Hayes) will be released on the record label "Promote Love Records" founded by Pamela Méndez herself. For her release she found press partners in Germany and France where the album will also be promoted. But Pamela's DIY spirit was not created overnight. It is the result of a personal debate on her role as an artist in society. It's the autodidactic training through life, which after some failed relationships with record companies made her dare to dive alone into the music business. In her music you can clearly hear the courage to go her own way. She has succeeded in manifesting her vision of a multi-levelled sonic universe. In times of self-optimization, algorithms and big data, Pamela celebrates the uncontrollable and incomprehensible happenings of life. The partly ragged breaks in the arrangements instigate Pamela's very personal and fragmentary texts. Accompanied by Nicolas Stocker's pulsating drumming, the amazing nuances of Luzius Schuler's formative synthesizer sounds and Adrien Guernes hypnotic groove on bass, Pamela's impressively mature voice can shine and carry the optimism of her songs into our minds, our gut as well as our hearts.