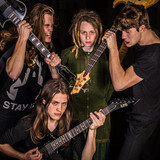 The Generations Army is a young thrash metal band from southern Sweden.   The band consist of: Elvin Landaeus Csizmadia: Vocals/Guitar Ragnar Östberg: Lead guitar/Backup vocals Erland Östberg: Bass/Backup vocals Calle Frogner Moberg: Drums   The band started out for real when Calle joined in the spring 2015. New songs were written and a lot of shows played. In the summer 2016 they entered the studio to record the debut album Still Screaming, which was released in the winter 2016/spring 2017. After the released they played a shit load of gigs and in the fall of 2017 they went out on their first European tour. Two weeks on the road and 10 show later they entered the studio once again to record the up following EP Voices and Visions. A music video to the track “Voices and Visions” was recorded in March 2018 and released

a month after. The whole EP was released a week after the video release.   At the moment they are playing live shows home in Sweden and in Europe.   Currently unsigned. Looking for labels to work with!