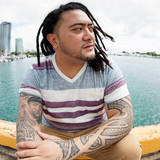 J Boog is a reggae singer of Samoan descent who was born in Long Beach and raised in Compton, CA. Steeped in Samoan culture and as the son of a Samoan chief, J Boog comes from a large family with 8 siblings who all offered exposure to other genres, such as rap and R&B which allowed J Boog a sense of freedom to be himself and create his own unique reggae sound. J Boog currently lives and travels between Hawaii and California though he has not taken a break since the release of his debut album "Hear Me Roar" in 2007. His close collaboration with island music pioneer, Fiji, helped spur the creation of J Boog’s unique sound, as well as pave the way for many other Polynesian artists. Another great milestone in J Boog’s career was when he joined the Hawaii/San Francisco based musical family, Wash House Music Inc., with whom he has released 2 more full-length albums and a handful of EPs and singles while also being featured on tracks by artists including SOJA, Iration, The Green, Morgan Heritage, and more. Much like everyone else, 2020 has been a crazy year for J Boog with his 2011 track, “Let’s Do It Again,” exploding on Tik Tok with a viral dance that garnered the attention of high-profile dancers like Charli D'Amelio and Jason Derulo. He has also released three singles, “Siva Mai” ft. Siaosi, “Ain’t No Love Like,” and “Free Of Dem” and hosted a dance competition of his own for “Siva Mai” that gained entries from dance crews across the world.