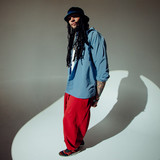 Travie McCoy has always been the unique one, the one ahead of his time, the one that didn’t fit into an existing box, and the one that always chose to forge his own. Growing up as a bi-racial kid in Geneva, NY, he grew up loving hardcore and punk rock, along with hip hop and R&B, and instead of choosing one lane, he created a genre-bending sound that changed what modern alternative and pop looked like. He formed Gym Class Heroes, a group that found a community in the alternative/punk space, but shot into the mainstream with hits like the 3x Platinum “Cupid’s Chokehold” and “Stereo Hearts.” But as a solo artist, he hit new heights, and jump-started the careers of a number of up and coming artists, with songs like the 4x Platinum, “Billionaire ft. Bruno Mars.”

But through all of this, Travie started battling with addiction and depression, leading into a real moment of rock bottom that almost ended his career and life. After getting into recovery and working through his constant demons, he started feeling creative again, and decided that he was going to be true to himself and his craft. He wanted to write music that he 100% believed in - that he could pour out his heart and soul into - and that could be the cathartic vehicle of self-expression that he was missing.