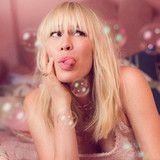 Natasha Bedingfield is a UK born singer songwriter and creator who grew up in southeast London. She left university to pursue her dream in music. Natasha signed her first record deal with indie label Phongenic, an imprint of Sony. She collaborated with an incredible team of songwriters Steve Kipner, Andrew Frampton, Danielle Bris Bois and Wayne Wilkins. Natasha had immediate success on the British charts with songs "Single”, "These Words” (her first No. 1) and Unwritten which later dominated the US chart. She followed this up with radio hits “Pocketful of Sunshine” and “Love Like This”. The golden reception for Bedingfield's rhythmic pop sound netted her platinum record sales and numerous awards. Bedingfield’s other fan favorites include “Soulmate”, “I Wanna Have Your Babies” and the beautiful ballad “Wildhorses”. She has done numerous collaborations with other chart topping artists such as Nicki Minaj, John Legend, Rascal Flatts, Paul McCartney, Sheryl Crow and Big Sean. Natasha has a diverse audience that spans generations and cultures. She gained a significant LGBTQ+ following with her bold and vulnerable spirit. More recently Natasha’s song “Unwritten” had a viral resurgence on Tik Tok and is currently the no1 dance challenge of Summer 2021 Natasha has teamed up with Wayne Wilkins, one of her original producers, along with Billy Gerrity and has delighted fans with the announcement of new music.