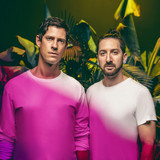 Consisting of drummer Jeremy Salken and saxophonist and producer Dominic Lalli, Big Gigantic is an electronic dance act based in Boulder, Colorado. Armed with muscular beats and basslines and loads of screeching and squealing synthesizer lines, they quickly connected with the festival circuit. Salken and Lalli performed at Mountain Jam, Bonnaroo, Lollapalooza, and Ultra Music Festival, among other events. From 2009 through 2012, the duo released three albums -- Fire It Up, A Place Behind the Moon, and Nocturnal -- on their own. The gradual development of their boisterous sound continued on the 2014 release The Night Is Young, another party-ready amalgamation of EDM, contemporary rap production, and pop. The single "Get on Up" followed in 2015. One year later, Brighter Future placed high on the electronic charts, thanks to the duo's production skills as well as a lengthy roster of guests (Waka Flocka Flame, Logic, Pell, Hartswick, Cherub). A remixed version of the record, aptly named Brighter Future Remixed, arrived the following year. Over the next two years, Big Gigantic issued a number of singles including 2018's NGHTMRE collaboration "Like That," and 2019's "You're the One" featuring Nevve and "Friends" featuring Ashe. ~ Andy Kellman, Rovi