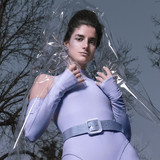 Kaleema is Heidi Lewandowski- a multi-instrumentalist, composer, producer, and singer from Buenos Aires who’s planted herself deeply in the potent Latin American electronic scene. She released her debut album "Nómada" in 2017, receiving an array of critical acclaim for how she seamlessly and hypnotically weaves together contemporary electronic elements and tradition Latin American instrumentals. Since the release of the album, she’s been catapulted onto renowned stages such as MUTEK Montreal, FUSION & Lollapalooza among others. "Útera"

Kaleema’s studio album to be released in February 2021 is her second studio album- an immersive experience of exceptional quality that reveals her personal and emotional evolution. To listen is to be enveloped in a natural aura rich in it’s sonic architecture, almost as if we were among the trees she sees through the window of her studio. But her creative space is also a high tech sanctuary where she creates sophisticated electronic arrangements and continues to refine her production skills and characteristic vocals. Whereas Nómada delivered tribal vibes within gritty urban compositions, here Kaleema delivers a more hypnotic and introspective space of creative fire and electronic rhythms, which at times moves into downtempo and electronic ambient. At its core, Útera taps into Heidi’s deep sense of connection to the natural world, and how her growth reflects the growth around her.