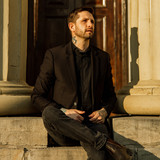 “There’s truth in the stories of every drunk sailor. The fables are true, there are ghosts in the water." – Athanase - Old Town Athanase (pronounced ATH-an-ouse) is a modern folk-rock band out of Hamilton, Ontario whose music “is as eternal as their name is unique” (Y108). The band's moniker is Greek for "immortal" — fitting for a band that uses songs to tell stories that transcend generations. They gracefully bend genres, combining elements of americana, alternative, 50’s rock n roll, and country to create an emotional yet energetic experience. “We’ve been called ‘modern folk’, and I think that’s because we put on a fun live show - like the energy from a 1950’s rock n roll concert - while still keeping true to the elements we love from folk,” says Athanase singer/songwriter Jason Baronette. While their sound is unique, listen and you’ll quickly find they do not hide their influences. Their sound can be attributed to their love of artists from americana giants such as Jason Isbell, The Decemberists and Bright Eyes, to Canadian heroes The Tragically Hip, and even pop-icon Taylor Swift.