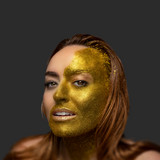 Since her debut Róisín has shared the stage with a host of internationally renowned artists, including Lionel Richie, Bryan Ferry, Brad Paisley, Hozier and Colin Hay as well as headlining her own tours in Ireland, Germany, The US and Australia. In 2016 Róisín was invited to perform at JJ Abram’s Oscar Wilde Awards in LA where she shared the bill with Snow Patrol to play for Stephen Spielberg, James Corden, and many more. Later that year she won the coveted Tatler Woman of The Year Award for Music.   Following on from her Debut album ‘The Secret Life of Blue’ O has gone on to release a number of hugely successful singles including hits ‘Give It Up’ and ‘Warn Me of Silence’, as well as her version of Sia’s ‘Chandelier,’ which received over a million views online.   After three years working with band Thanks Brother, 2020 lockdown brought O back to her roots, using the timeout from the constant touring and recording to reset. After receiving a huge response to her cover of Selena Gomez’ ‘Lose You to Love me’, as well as her involvement in the No.1 single ‘Dreams’ with Irish Women in Harmony, Róisín’s resolve to return to her solo career was cemented and she released ‘Heart + Bones’ in January 2021.   Written with Danny O’Reilly (The Coronas) while in isolation in Dingle, and produced by Philip Magee (The Script, Kodaline, JC Stuart) the songs powerful lyrics, combined with Roisin’s undeniable strength as a vocalist makes it her most remarkable single to date.