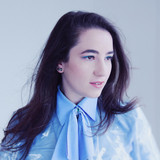 Danielle Eva Schwob represents a new-generation of composer-performer, one who crosses genres with impact and aplomb. The classically trained artist feels as at home composing bold, immersive instrumental music for concert halls and film scores as she does crafting art-pop recordings that brim with irresistible hooks. Danielle is also a music entrepreneur, gifted at curating programs, producing events and convening disparate talents – keen to create synergistic presentations whereby the visual enhances the aural. Originally from London but now based in NYC and LA, Danielle has been singled out as “a notable cross-genre composer” by The New Yorker, while NPR marveled over her pop-music project, DELANILA, saying of its debut release, Overloaded: “This album – wow. It really creates a world… a huge record.” About her ability to move adroitly from one genre to the other , Danielle says: “Music is a language. Composing a string quartet is different from producing a pop song, like speaking French is different from speaking English, but they are both languages, just as a string quartet and a pop song are both music. You can invest pop music with a richness and complexity akin to classical music, just as you can create classical works that have an emotional directness like the best pop songs. Whether it’s classical music or a film score or a rock record, you want to communicate feeling to the audience. There may be different techniques, but the destination is the same: emotion.”