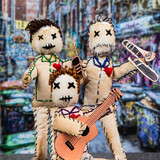 A unique trio combining trumpet, trombone, and guitar, Ensemble Three has earned a reputation as an “inspiring example of forward-thinking classical music culture” that has garnered them the Melbourne Recital Centre Contemporary Masters Award and a showcase by ABC Classic FM at the International Rostrum of Composers. Their innovative performances and an ambitious commissioning agenda seek to elevate the work of emerging composers and musicians of historically underrepresented demographics. Ensemble Three’s debut album, Midnight Songs, has been described as an “intriguingly beautiful record” that “hold[s] the listener enthralled.” Their second album, Despite Our Silent Elders, marks a shift to working with electric guitar, an approach that was further developed in Voodoo Sonnets, due to be released in April 2021. Upcoming projects include a collaboration with the Ngarra-Burria First Peoples Composers Program, multiple world premieres at the Melbourne Recital Centre, and an appearance at Tokyo’s “Born Creative” festival. The members of Ensemble Three all serve on the music performance staff at the Melbourne Conservatorium of Music (Melbourne University). http://ensemblethree.com/