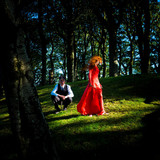 After a ten year hiatus Living With Eating Disorders returned in 2020 with two new singles ‘The Snake’ released on Halloween and ‘Carcass’ released on Winter Solstice. Formed in 2001 by Andrea Kerr and Jared Hawkes the London duo caught the attention of renowned producer John Fryer (Depeche Mode, Cocteau Twins, Nine Inch Nails) who produced and released their debut EP ‘White Like Snow’ in 2004 on his label 'Something to Listen To'. The band received high praise for the EP and played several UK shows including support for Psychic TV & Whitehouse but increasing pressure surrounding the name forced the band to change it to Colt and on Halloween 2005 they released their debut album These Things Can't Hurt You Now So Throw Them In The Fire to critical acclaim from the independent worldwide press.

In 2008, after the dissolution of 'Something to Listen to', and the breakdown of the live band Andrea and Jared released ‘You hold on to what's not real’ and re-released 'These things...' on their own label 'Obvious Records'.