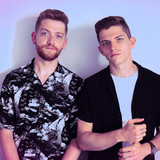 Hailing from Glasgow, Scotland, the Dance/Pop duo Able Faces is made up of brothers Jack and Mark McNeilage. The duo have been working with a number of artists from all over the world. Recent collaborators include VAMERO, Marc Benjamin, Felix Samuel, Lulleaux, and Tom Enzy. Able Faces have released 3 tracks on Sam Feldt's Heartfeldt Records, as well as releases on Universal, One Seven/Discowax, Loudkult, Axwell's Axtone Records, and Oliver Heldens' Heldeep Records. Able Faces’ music has received support from many DJs including Sam Feldt, David Guetta, Afrojack, Nicky Romero, & Lucas & Steve. Recent airplay includes BBC Radio 1, and being 'Single of the Week' on BBC Radio Scotland. As well as being in-demand topliners and songwriters, Able Faces have also established themselves as an exciting live act. They have performed all over the U.K., including to a crowd of over 5000 at the Royal Albert Hall in London, and multiple times in King Tuts in Glasgow. The band has had 3 residencies at The Edinburgh Festival, and has supported acts such as BBC's 'Sound of 2019' Shortlisted Sea Girls and King No-One.