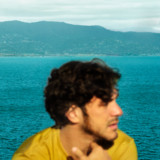 Jack Savoretti’s seventh album arrives with its own genre. Europiana is both its title and a term coined to capture the spirit of the songs and the sun-soaked influences they absorb. “When I came up with the concept, some people thought I’d lost the plot,” laughs Jack. “What? You want to invent a new genre? In fact, it already exists - it just isn’t acknowledged. There’s no chart or award for it. “Europiana isn’t a sound. It’s references and inspirations and the emotions they evoke. It’s the music of my childhood summers, remade for today. It’s apparent which artists and eras inspired us, just as it was obvious Oasis loved The Beatles, but the music is modern, not a pastiche.” Recording took place at a socially-distanced Abbey Road, with the band playing as live. “I arrived with a suitcase of 18 songs and we recorded them all as live takes in ten days,” says Jack. “Everyone was so excited to be back at work, to experience the joy of making music again. The love and camaraderie was nuts. As cheesy as it sounds, it was an emotional experience.” Jack’s first album on new label EMI, Europiana is a summer soundtrack crying out for a crowd. Gigs have already been booked. Plans are afoot for a series of special outdoor shows. Put the rose on ice to toast both its release and a genre that now has a name.