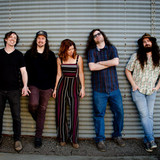 A band that refuses to be locked into a single genre, Davis, California-based Boot Juice find a sense of freedom in their ability to float from bluesy rock’n’roll to progressive bluegrass and back. Inspired by the likes of Railroad Earth and soulful harmonies of Creedence Clearwater Revival, Boot Juice curates a sound that is uniquely their own, resulting in a layered and dynamic live performance. Since 2016,