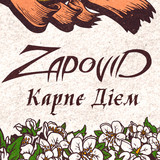 Zapovid has found recognition performing all across North America. Since 2011, their melodic and unique folk-rock style has grown to be a favourite for audiences of all ages. In 2015, the band released their debut album titled “Dity Rodu Kozatskoho”, a mix of original songs and traditional Ukrainian folk songs. ​In May of 2019, Zapovid released their second album "Radiohvyli" which features mostly original songs including the summer smash hit "Sonce i Lito!" Zapovid’s mission is to bring energetic Folk-Rock to the masses by incorporating elements of various musical styles and influences.