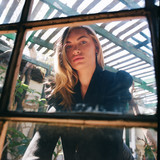 Nya is a genre-bending singer/songwriter based between Los Angeles and Uruguay. A sharp-witted lyricist with an unmistakable voice, Nya brings a soulful delivery and jazz-influenced musicianship to her cosmopolitan alternative pop, crafting unflinchingly honest songs that resonate with listeners across the globe. Raised in Tampa, Florida, Nya was enchanted by the transportive power of music from a young age, captivated by the expressiveness of classic performers such as Frank Sinatra and Sarah Vaughan. Those great stylists guided her way as Nya discovered her passion for singing in high school, gifted with a silky, timeless voice and a preternatural ability to translate her deepest feelings into relatable songs with ear-worm melodies. As her artistic growth continued, Nya embraced the influence of her favorite modern performers, from the unvarnished lyricism of Fiona Apple to vibe-heavy, contemporary acts like the Internet who defy neat musical categorization. With an ever- evolving sound, Nya’s retro-tinged work always shows a forward- thinking vision and a desire to push herself creatively. As longtime fans know, Nya’s creative journey might take her anywhere, but the end point is always clear: soul-baring music that sticks in your head and cuts to the bone.